Enquire Online For a Call Back

Off Tap Plumbing Pty Ltd is a licensed plumbing company for your peace of mind.

We offer 24 hour 7 days a week emergency plumbing service when you need us most.

Your Trusted Sydney Plumber with

Jesse is highly professional and reliable. Amongst fixing our standard plumbing requirements, he came up with an innovative solution to maximise harvesting of rainwater from our whole roof to the water tank on one side - something two other plumbers could not achieve. We highly recommend him as a reliable, tidy and first class tradesman and a pleasure to deal with!!

Karen Locke⭐⭐⭐⭐⭐
If you are looking for a reliable and honest plumber, then Jesse should be on your priority call list. I have called out to Jesse several times for help with various issues including gutter replacement, leaking roof, installing of sinks, taps, hot water systems and washing machines. No job is an issue for Jesse. He always arrives on time, is a problem solver, doesn't leave until the job is finished, and always cleans up after him. Best Plumber and a really nice guy. Don't look past Off Tap Plumbing for all your plumbing needs.

Lachlan Clark⭐⭐⭐⭐⭐
If you’re like me you read reviews but don’t write them! But, my recent experience using Jesse from ‘Off Tap Plumbing North’ was exceptional. Jesse and his crew did a couple of tricky jobs for us. Nothing was a problem and all requests were met with positivity, professionalism and utmost care. What really impressed me were the small touches, you know how messy some tradies can be - Jesse and the team took their shoes off before entering our house and cleaned up after themselves - AMAZING!

Kylie Bowra⭐⭐⭐⭐⭐
We reached out to Off-Tap Plumbing when our normal plumber was unable to assist with a tap leak and additional install of a water tank and the service was exceptional. Our client was thrilled with the outcome, the work was of the highest standard, cleanliness when the job was complete was exceptional and the after service was next level. They went above and beyond in a timely and positive manner. Highly recommend Off-Tap Plumbing!

Katherine Anderson ⭐⭐⭐⭐⭐
Main impression is the standard of response. Pretty good on punctuality especially considering how bad some trades are nowadays . Jesse is different. no complaint about work quality and always has positive attitude. works fast. Thinks laterally which makes a big difference 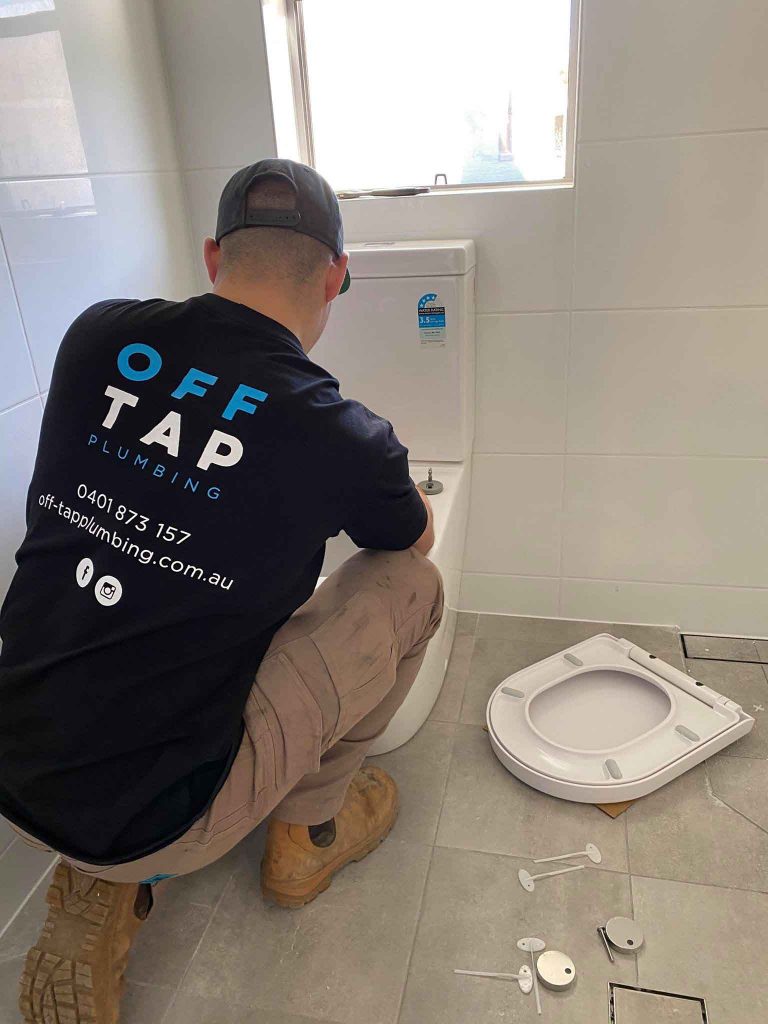 Have a leaking tap? Or looking for new tapware? Off Tap Plumbing have you covered.

Over time parts wear. Our technicians will restore your plumbing in no time, anywhere in the Sydney area.

From kitchen renovations to replacing a sink, Off Tap Plumbing can assist with everything kitchen related.

Need a new toilet or looking to renovate? Our team is ready for all of your plumbing needs.

Leaking pipes burst, don’t let them get that far! Unsure of where the leak is? We’ll find it!

Blocked drains are an unfortunate part of life. Clearing them is our number one priority.

Ready to Book in Your Next Plumbing Job?

When you hire Off Tap Plumbing for all plumbing servicing including blocked drains, bathroom renovations, toilet installations or replacements and all things hot water, you can trust that it will be affordable and 5 star service every time.

Off Tap Plumbing are here to help, contact us today!

A blocked drain can start as a minor hassle and turn into a significant problem.  If you discover that your drains might not be draining effectively, it’s just a matter of time up until it’s absolutely shut.

While blocked drains in the Eastern Suburbs, Sydney can arise in a matter of moments, they’re usually brewing underneath the surface for several months. As particles, grime, hair, and other obstructers build up over time, your drain becomes considerably blocked.

Unlike other Sydney Eastern Suburbs blocked drains treatment, our long-term approaches ensure you won’t have to phone us to unclog your drain once again.

Blocked drains often happen at the most inconvenient times. If you’re experiencing an extreme problem outside of normal service hours, you need to get in touch with a qualified 24 hour Eastern Suburbs plumber that can solve the problem quickly. Hesitating too long can have devastating effects.

Our all hours plumbing Eastern Suburbs Sydney team at Off Tap Plumbing provides emergency solutions that may help you prevent devastating damage to your house or commercial property.

At Off Tap Plumbing, our plumbers are qualified gas fitters that can help you install or repair natural gas products. If you’re having issues with your warm water plumbing, or you think your system is seeping gas, it’s important to get in contact with our staff as fast as possible.

All of our Eastern Suburbs gas plumbers  are trained, certified, and insured. By partnering with Off Tap Plumbing, you’re acquiring access to most professional gas fitters in the Eastern Suburbs.

Gas Services in the Eastern Suburbs:

There’s absolutely nothing worse than a chilly shower, particularly when the Eastern Suburbs temperature begins to fall. Unfortunately, gas heated water can in some cases turn cold when there’s an issue with the hot water system. At Off Tap Plumbing, we employ a detailed approach to identify the origin cause of your hot water loss.

We have several years of experience in installing hot water systems of different kinds. If you’re experiencing regular issues with your hot water heater system get in touch with us today if you’re in need of Eastern Suburbs plumbing services and if your water isn’t heating up.

Our friendly team is looking forward to hearing from you. We are happy to discuss your project in person or over the phone and we’re always willing to provide free quotes to prospective clients.

If Your Searching “Plumber Near Me” Call Us Today!

Our friendly plumbers Sydney team at Off Tap Plumbing Pty Ltd is looking forward to hearing from you. We are happy to discuss your project in person or over the phone and we’re always willing to provide free quotes to prospective clients.

Looking for another area? Head back to our Serviced Areas page.

Offering 24/7 Monday to Friday service, you can call us at any time, day or night.

Please provide some information about your job and we will call you back!